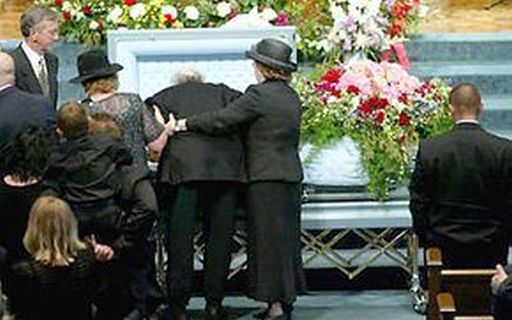 On this day in 2003: A bevy of country stars and everyday fans showed up at the First Baptist Church in Hendersonville, Tennessee, where June Carter Cash was remembered in a touching public funeral. Johnny Cash, naturally, occupied a seat in the front row, positioned in a wheelchair not far from June’s light blue casket. Others on hand included daughter Carlene Carter, Tom T. Hall, Kris Kristofferson, Rodney Crowell, Ricky Skaggs, Connie Smith, Marty Stuart, Hank Williams Jr. and Trisha Yearwood. Larry Gatlin and the Oak Ridge Boys – two acts whose careers benefited from Johnny’s assistance – sang. And Emmylou Harris performed a couple of songs with the assistance of Sheryl Crow. Rosanne Cash, who was 12 years old when June married Johnny, told the assembly that June banned the word “stepmother” from the household. According to the Associated Press, Rosanne said, “My daddy has lost his dearest companion … and his soul mate. If being a wife were a corporation, June would have been a CEO. It was her most treasured role.”