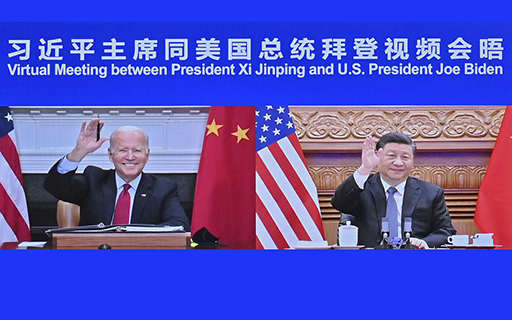 By KEN MORITSUGU and AAMER MADHANI

BEIJING (AP) — China on Tuesday welcomed a virtual meeting between President Xi Jinping and U.S. President Joe Biden as raising hopes for better relations, while the U.S. was more muted on the talks as the world’s two biggest powers sought to ratchet down more than a year of tensions.

The leaders appeared to put aside the language of acrimony in their first formal meeting since Biden took office. Xi welcomed the U.S. leader as his “old friend,” and Chinese Foreign Ministry spokesperson Zhao Lijian said the exchange was candid and constructive.

“If China-U.S. relations cannot return to the past, they should face the future,” Zhao said, calling the meeting “conducive to increasing positive expectations for U.S.-China relations.”

However, both sides held firm to their positions on the issues that divide Washington and Beijing, with Xi warning that the U.S. and Taiwan are playing with fire over the self-governing island that China claims.

The two nations were aiming to end a sharp deterioration in relations that accelerated under former U.S. President Donald Trump and had festered since Biden became president in January. The video conference, which took place Tuesday morning in Beijing and Monday evening in Washington, lasted more than three hours.

Facing domestic pressures at home, both Biden and Xi seemed determined to lower the temperature in what for both sides is their most significant — and frequently turbulent — relationship on the global stage.

“As I’ve said before, it seems to me our responsibility as leaders of China and the United States is to ensure that the competition between our countries does not veer into conflict, whether intended or unintended,” Biden told Xi at the start of the meeting. “Just simple, straightforward competition.”

The White House set low expectations for the meeting, and no major announcements or joint statement were delivered. Still, White House officials said the two leaders had a substantive exchange.

Xi greeted the U.S. president as his “old friend” and echoed Biden’s cordial tone in his own opening remarks, saying, “China and the United States need to increase communication and cooperation.”

The positive tone sets an example for both countries to try to identify common ground rather than find fault with each other, whether on trade, climate change, or geopolitical issues such as Afghanistan and North Korea, said Wang Huiyao, president of the Center for China and Globalization think tank in Beijing,

“I see this dialogue as a stabilizer of the bilateral relation,” he said. “I don’t expect this one summit to bring us back to the good old days, but certainly it stops the downward spiral.”

Xi held a tough line on Taiwan, which Chinese officials had signaled would be a top issue for them at the talks. Tensions have heightened as the Chinese military has dispatched an increasing number of fighter jets near the self-ruled island, which Beijing considers part of its territory.

Xi blamed the tensions on Taiwan seeking to attain independence through reliance on the U.S. and some on the American side using Taiwan as a way to interefere in China, the official Xinhua News Agency said.

“This is extremely dangerous, it’s playing with fire, and they that play with fire will burn themselves,” Xi was quoted as saying by the agency.

Chinese military forces held exercises last week near Taiwan in response to a visit by a U.S. congressional delegation to the island.

The White House said Biden reiterated the U.S. will abide by the longstanding U.S. “One China” policy, which recognizes Beijing but allows informal relations and defense ties with Taipei. But Biden also made clear the U.S. “strongly opposes unilateral efforts to change the status quo or undermine peace and stability across the Taiwan Strait,” the White House said.

The relationship has had no shortage of tension since Biden strode into the White House in January and quickly criticized Beijing for human rights abuses against Uyghurs in northwest China, suppression of democratic protests in Hong Kong, military aggression against the self-ruled island of Taiwan and more. Xi’s deputies, meanwhile, have lashed out against the Biden White House for interfering in what they see as internal Chinese matters.

The White House in a statement said that Biden again raised concerns about China’s human rights practices, and made clear that he sought to “protect American workers and industries from the PRC’s unfair trade and economic practices.” The two also spoke about key regional challenges, including North Korea, Afghanistan and Iran.

As U.S.-China tensions have mounted, both leaders also have found themselves under the weight of increased challenges in their own backyards.

Biden, who has watched his poll numbers diminish amid concerns about the lingering coronavirus pandemic, inflation and supply chain problems, was looking to find a measure of equilibrium on the most consequential foreign policy matter he faces.

Xi, meanwhile, is facing a COVID-19 resurgence, rampant energy shortages, and a looming housing crisis that Biden officials worry could cause tremors in the global market.

The U.S. president was joined in the Roosevelt Room for the video call by Secretary of State Antony Blinken and a handful of aides. Xi, for his part, was accompanied in the East Hall of the Great Hall of the People by communist party director Ding Xuexiang and a number of advisers.

The high-level diplomacy had a touch of pandemic Zoom meeting informality as the two leaders waved to each other once they saw one another on the screen, with Xi telling Biden, “It’s the first time for us to meet virtually, although it’s not as good as a face-to-face meeting.”

Biden would have preferred to meet Xi in person, but the Chinese leader has not left his country since the start of the coronavirus pandemic. The White House floated the idea of a virtual meeting as the next best thing to allow for the two leaders to have a candid conversation about a wide range of strains in the relationship.

With Beijing set to host the Winter Olympics in February and Xi expected to be approved by Communist Party leaders to serve as party leader next year and then a third term as president in 2023 — unprecedented in recent Chinese history — the Chinese leader may be looking to stabilize the relationship in the near term.

Both leaders gave nods to their history with the other. Biden noted that the two have spent an “awful … lot of time” speaking to each other over the years, and have never walked away “wondering what the other man is thinking.”

But the public warmth — Xi referred to Biden as his “old friend” when the then-vice president visited China in 2013, while Biden spoke of their “friendship” — has cooled now that both men are heads of state. Biden bristled in June when asked by a reporter if he would press his old friend to cooperate with a World Health Organization investigation into the coronavirus origins.

Xi, however, seemed interested in publicly reviving the warmth of the earlier days of their relationship, saying, “I am very happy to see my old friend.”

Despite the tensions, there have been moments of progress in the U.S.-China relationship over the past months.

Last week, the two countries pledged at U.N. climate talks in Glasgow, Scotland, to increase their cooperation and speed up action to rein in climate-damaging emissions.

The White House has said it views cooperation on climate change as something in China’s interest, something the two nations should cooperate on despite differences on other aspects of the relationship.

“None of this is a favor to either of our countries — what we do for one another — but it’s just responsible world leadership,” Biden told Xi. “You’re a major world leader, and so is the United States.”