1981 – Kenny Rogers wins four American Music Awards on Jan. 30, 1981, including Favorite Country Single, for “Coward Of The County” and Country Album for The Gambler. Other winners included: Barbara Mandrell, The Statler Brothers, and The Eagles.

1994 – Clint Black, Wynonna Judd, Travis Tritt and Tanya Tucker perform at the halftime show (billed as Rockin’ Country Sunday) at Super Bowl XXVIII. The finale featured a special appearance by Naomi Judd, who joined Wynnona in performing The Judds’ single “Love Can Build a Bridge”. It was their first major appearance together since their Farewell Tour of 1991.

On Jan. 2, 1997: Country singer Faith Hill goes double-platinum for the second time, with the album It Matters To Me.

It Matters to Me was Faith Hill’s second studio album, released in 1995. 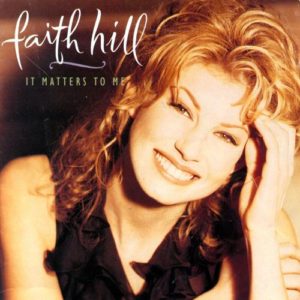 With hundreds of songs released between the two of them, Tim McGraw and Faith Hill had to go through the painstaking process of whittling down their catalogs for the “Soul2Soul Tour” set list. Tim tells Entertainment Weekly, “You’re never going to get to do every song that every person wants.” But when Tim almost cut his song “Live Like You Were Dying” from the set list, Faith wasn’t having any of it. She says, “I would’ve packed my bags and left if he’d done that!” Needless to say, Hill got her way and the song made the set list.

For the second time this year, Tim McGraw and Faith Hill have helped a couple at their “Soul2Soul Tour” learn the gender of their baby. The latest gender reveal came over the weekend during a tour stop in Moline, Illinois, with Faith telling Vikki and Rodney Kula the happy news as McGraw stood on the stage in the background. After the couple assured Faith that they wanted her to be the first to learn the baby’s sex, she opened the envelope and exclaimed to the whole crowd, “It’s a boy!” A video of the special moment can be seen here.

Midland didn’t just get to open for Tim McGraw and Faith Hill at their recent “Soul2Soul Tour” stop in Edmonton, Canada; the band actually got to sing with McGraw backstage at the show. In a video posted on Tim’s Facebook page Thursday (6/15), Midland can be seen huddled backstage with McGraw and his band as they perform a rendition of Alabama’s“Dixieland Delight.” The video can be seen here.

Tim McGraw and Faith Hill are showing off the vacation home they built on their own private island in the Bahamas. In a new article in Architectural Digest, the couple talks about purchasing the 20-acre island back in 2003 and the process that it took to build their dream home, which they didn’t move into until 2012.  Faith says they basically had to build a “little town” when constructing the home, including providing shelter and utilities for the original construction workers as well as the current caretakers. The family even stayed in a pair of seaside yurts during the decade the home was being constructed, which Hill says was “like camping.”

On this day in 1999, Faith Hill took home four trophies at the 34th Annual Academy of Country Music awards on CBS from Los Angeles. Hill won Single Record and Video of the Year for “This Kiss”, claimed the Top Female Vocalist award, and shared the Vocal Event Award with husband Tim McGraw for “Just To Hear You Say That You Love Me”.

On this day in 1994, Faith Hill was on top of the Billboard US Hot Country Songs chart with her cover of “Piece of My Heart”. The song originally was recorded by Erma Franklin in 1967, though most people know the version by Big Brother and the Holding Company, with Janis Joplin on lead vocals.

Hill included the song on her debut album, Take Me as I Am. Prior to recording the track, Hill had never heard Janis Joplin’s rendition. After finding this out, the producers refused to allow her to listen to the Joplin version until she had completed her own recording.

With lyrics like “You better respect your Mama,” mothers everywhere would be proud of their sons singing Tim McGraw and Faith Hill’s new duet, “Speak to a Girl.” And that list of proud mamas now includes McGraw’s sister, who recently filmed her son singing the tune. Tim then shared the video of his nephew belting out the tune on Instagram, along with the caption, “My sister caught my nephew singing along #SpeakToAGirl.”