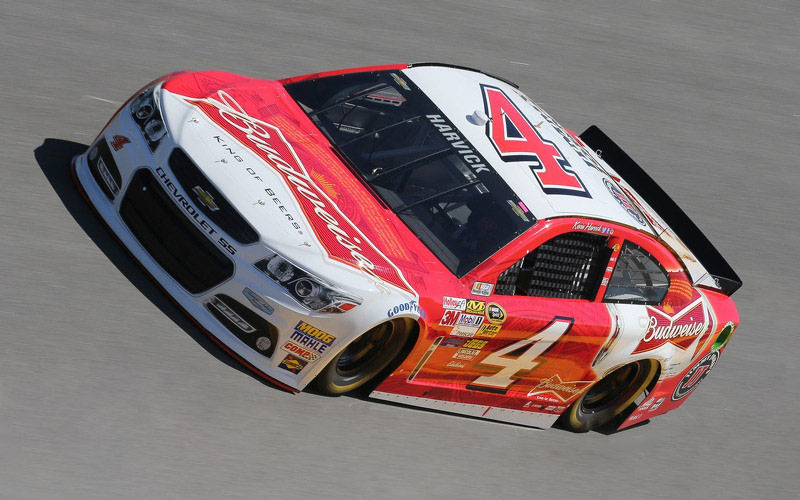 For 2014 Sprint Cup Series champion Kevin Harvick, this year’s post-season has been an up-and-down experience.  Sunday afternoon at Kansas Speedway, Harvick was “UP” … charging past race leader Carl Edwards on the day’s final restart and driving off to victory – securing one of the eight spots in the next round of the 2016 Chase.  Harvick opened the post-season with a twentieth-place finish last month at Chicagoland Speedway, followed by a victory in New Hampshire.  But then, he was slowed by finishes of thirty-seventh and thirty-eighth before Sunday’s return to glory.  Harvick now joins Jimmie Johnson as the only two drivers with guaranteed spots in the Round of Eight that opens in two weeks at Martinsville Speedway.  Sunday’s margin of victory over runner-up Edwards was one-point-one seconds.  Joey Logano … gunning for his second straight victory in the track’s fall Cup Series race … ran third.  Johnson, last week’s winner in Charlotte, placed fourth.  Kyle Busch, this year’s Number-1 seed in the post-season Chase, completed the top five in his bid for a season sweep on the Kansas City oval, having won there in early May … Pole sitter Matt Kenseth led a race-high 116 laps and finished ninth … Sunday’s race included sixteen lead changes among ten drivers … There were eight cautions for thirty-eight laps … With the 2016 Chase now at its halfway point, three different drivers have won the first five races.  Harvick and Martin Truex Junior have two victories apiece with one for Johnson.